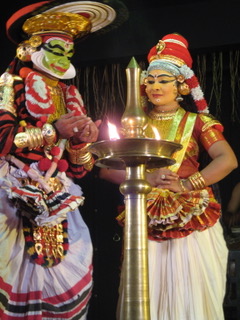 WHERE
Harvard Aggasiz Theatre 5 James St, Radcliffe Yard , Cambridge, MA
WHEN
COST
Free, first come first seated
The Napathya troupe from Kerala, India will present a very rare performance of Sanskrit Theater— KUDIYATTAM
Kudiyattam is the last living performance tradition of Sanskrit theater in the world. Recognized by Unesco as preserving “masterpieces of the oral and intangible heritage of humanity,” this remarkable, visually powerful tradition survived only in Kerala, in the far south-west of the Indian sub-continent, where for centuries it was performed primarily in the great temples.  The main texts are taken from Sanskrit plays composed in medieval Kerala and focused largely on narratives taken from the great Indian epics, the Mahabharata and the Ramayana.
The Nepathya troupe from the village of M ūḻ ikku ḷ am, just north of Cochin, is one of the finest groups of classically trained artists in Kerala today. The troupe has traveled widely both in India and abroad (Singapore, Japan, Paris, Jerusalem, New Haven), and includes both performers and drummers.
For more information: musicdpt@fas.harvard.edu or call 617-495-2791.
Parking tips at: https://www.boxoffice.harvard.edu/Online/default.asp?BOparam::WScontent::loadArticle::permalink=agparking