Workshops > Hungarian Dance Weekend at Pinewoods
BACK TO ALL WORKSHOPS 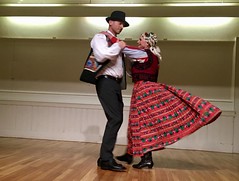 Our dance teacher, Dénes Takácsy, was born and raised in Gyula, Hungary. He started dancing as a boy over 30 years ago, then moved to Békéscsaba, Hungary, performing with the Balassi Dance Ensemble, a professional dance troupe, in countless international folk festivals all over the world. After moving to Boston to attend Northeastern University, Dénes came to the attention of several members of the Forgás Hungarian Dance Group and was invited to teach Hungarian and Transylvanian folk dance in Arlington, MA. He has now been teaching the Forgás dance class on Sunday evenings at the Church of Our Saviour in Arlington for more than 10 years. Dénes has performed several times with Beth Bahia Cohen in Boston, with the Borozda Dance Ensemble in Chicago, with the Rózsafa Dance Ensemble at the Kennedy Center in Washington, D.C., and with the Délibáb Dance Ensemble in New York City. He will perform at Carnegie Hall on May 20, 2019 with the Nikolett Pankovits Sextet and The River Voices. We have learned so much from him and are thrilled that he will be teaching at our Pinewoods Hungarian Dance Camp.